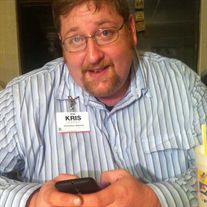 Visitation will be held Tuesday 11/18/2014 from 5:00 PM to 7:00 PM at the Cleveland Funeral Home in Cleveland. Funeral Services will be held 2:00 PM Wednesday 11/19/2014 in the Cleveland Funeral Home Chapel. Burial will be at the Lehrton Cemetery. Brother Raymond Sherwood will officiate the service.
A memorial will also be held 6:00- 8:00 PM Friday 11-21-14 for all the family, friends and coworkers in Texas. It will be at the Corinth Missionary Baptist Church in Bullard, Texas.

Kris was born on December 19, 1978 to Carl and Linda (Caldwell) Hopper in Cleveland, MS. He attended Cleveland High School. He was a former Kroger employee for many years and also worked at Western Sizzlin in Cleveland. He was the current Perishables manager for Brookshire Food Stores. Kris attended the Church of God of Prophecy for most of his life. His hobbies included playing softball, football, deer hunting and was an avid Texas Hold Um tournament player having traveled to Las Vegas playing the World Poker Tournament. His all time favorite NFL team since a kid was the 49 er's and player was Peyton Manning with the Colts and now Bronco's. He could tell you anything you wanted to know about sports, teams and players. He could add numbers faster than a calculator. He was left handed which made him a great home run hitter, first baseman and pitcher.
Thanks. Kris enjoyed having his friends and family around while he was cooking on the grill. He was a loving and free giving gentle giant who will be missed by his many friends and family.
He was preceded in death by brother Bobby Williams, grandparents Bill and Betty Jo Hopper, Farris and Lucille Caldwell and nephew Remington Williams.

Cleveland Funeral Home is in charge of arrangements. On-line guest register may be viewed and signed at www.clevelandfuneralhome.net


To order memorial trees or send flowers to the family in memory of Mr. Kristopher Hopper, please visit our flower store.