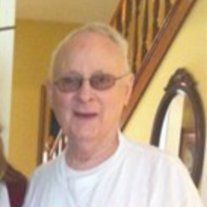 Joseph Leonard Cohn, Jr. of Cleveland, MS, passed away on January 7, 2014 at Baptist Hospital in Memphis, TN, with his family at his side. He was 80 years old. His life will be celebrated at St. Luke United Methodist Church, Cleveland, on Saturday, January 11, 2014, with visitation from 1:00 pm to 2:30 pm in the Fellowship Hall followed by a memorial service in the Sanctuary at 3:00 pm. Cleveland Funeral Home has charge with the Reverend Darian Duckworth officiating.
Leonard was born on March 15, 1933, in Belzoni, MS. He was the first of three sons born to Joseph Leonard Cohn, Sr. and Grace Blackwell Cohn, both now deceased. Leonard graduated from Belzoni High School and then Mississippi State University in 1955 with a Bachelor's degree in Industrial Management. He went into the Air Force upon graduation. He then moved to Natchez, MS, where he met and married his beloved wife, Ann Anstead Cohn. He spent a number of years in manufacturing and sales. He was an active member of St. Luke United Methodist Church and a member of the Memphis Emmaus Community for many years. Throughout his life, he served his church in numerous roles including teaching adult Sunday School, chairing various committees, and singing in the choir. Upon retirement, he and Ann relocated to Cleveland from Arlington, TN. He lived a life of unwavering faithful devotion to his family and his church.
Leonard leaves behind his loving wife Ann Anstead Cohn, whom he joined in Holy Matrimony on September 5, 1959, and shared 54 years of marriage. He leaves three devoted children, Robin Boyles of Cleveland, MS, Lenny Cohn, of Oxford, MS, and Bethany Sansone, of Collierville, TN. He also leaves two very special sons-in-law, Rick Boyles and Michael Sansone. He will be greatly missed by his four grandchildren, Michelle Boyles Polen (Jeremy) of San Antonio, TX, Dillon Boyles of Cleveland, MS, Shelby Sansone and Adam Sansone, both of Collierville, TN, and two great-grandchildren, Nicolas and Emily Polen of San Antonio, TX. Leonard is also survived by his two brothers and their wives, Charles and Niwana Cohn of Sherrills Ford, NC, and Jerry and Jill Cohn, of Jasper, GA, and dear cousin, Becky Allison of Phoenix, AZ.
In lieu of flowers, memorials may be made to St. Luke United Methodist Church or the charitable organization of your choice.


To order memorial trees or send flowers to the family in memory of Mr Leonard Cohn, Jr, please visit our flower store.