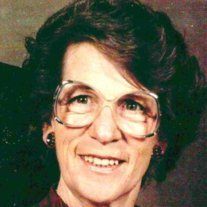 Mae Belle was born on December 31, 1935 to Joe and Sarah (Phillips) Land in LeRoy, IL. She attended the LeRoy, IL Schools. She joined the Navy in 1954 as the first woman enlistee from McLean County, IL. She married Wesley L. Brown on October 9, 1954 in Waukegan, IL. Following her husbands military career they lived in the Panama City Florida and Panama Canal Zone among other areas. Upon his retirement in 1979 they moved back to Rosedale, MS to be near family. She was a homemaker and a very talented artist who had learned to make ceramics in the military. Mae Belle was of the Baptist faith.
She was preceded in death by her parents, husband Wesley, a sister Nancy Eaton and a brother Tommy Land.

She is survived by Son, Wesley Eugene Brown of Batesville, AR. Sister, Phyllis Follis of Clinton, IL. Sister, Mary Bickers of Rosedale, MS.
Cleveland Funeral Home is in charge of arrangements. On-line guest register may be viewed and signed at www.clevelandfuneralhome.net


To order memorial trees or send flowers to the family in memory of Ms. Mae Belle Land Brown, please visit our flower store.