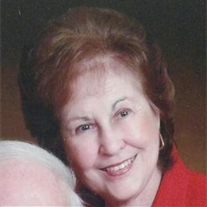 Mrs Walterine Pyron Ray, 83, of Cleveland, died Sunday, January 31, 2016 at Bolivar Medical Center. Visitation will be Wednesday February 3, 2016 from 12 noon till 1:45 at St. Luke United Methodist Church. Celebration of Life service will follow at 2 p.m. A private family Interment will be held at the Indianola City Cemetery. Pastor Darian Duckworth will officiate the service.

Mrs. Ray was born in Shelby on June 11, 1932 to Walter and Eula Pyron. She was raised in Indianola. Mrs. Ray graduated from Delta State Teachers College with a degree in education in 1951. She became a Jr. High science teacher and taught in Merigold and at Cleveland Jr. High and eventually at Bayou Academy, where she retired after over 30 years of teaching.

On March 21, 1952, she married William C. (W.C.) Ray. Together they had two children: son John Arnold Ray (deceased) and daughter Judi Ray Taylor. They were married for 64 years at her passing.

After retiring from her teaching career, Walterine continued to keep track of the many students she had taught throughout their lives. She loved reading, traveling, flowers, gardening, spending time at the lake and enjoying nature and bird watching. She also loved her family dearly.

She is preceded in death by her parents, Walter and Eula Pyron and her son John Arnold Ray.

Memorials may be made to St. Luke's United Methodist Church 1227 Deering Street Cleveland, MS 38732.
Cleveland Funeral Home is in charge of arrangements. To view and sign the online guestbook, go to www.clevelandfuneralhome.net.

To order memorial trees or send flowers to the family in memory of Ms Walterine Pyron Ray, please visit our flower store.