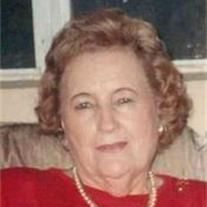 Norma Jean Cone Corley, age 90, of Cleveland formerly of Shaw, died on Saturday May 12, 2012 at the Bolivar Medical Center Long Term Care in Cleveland.  Visitation will be held Sunday May 13, 2012 from 4:00 PM to 6:00 PM and Monday May 14, 2012 from 10:00 AM to 11:00 AM at the Cleveland Funeral Home in Cleveland.  Funeral Services will be held 11:00 AM Monday May 14, 2012 at 11:00 AM in the Cleveland Funeral Home Chapel.  Burial will be at the Delta Heights Memorial Gardens in Cleveland. Reverend Robert Haney will officiate the service. She was born on March 30, 1922 to Charlie and Etta (Roberts) Cone in Prentiss, MS.  She married the late Guy R Corley on April 25, 1942.  She was a farmer's wife enjoyed helping work the farm in many areas. Later in life she worked as a clerk for the Fashioner's Dress Shop for many years and then her late daughters' shop, Shirley's Dress Shop for 10 years.  Ms. Corley's hobbies were gardening and taking care of animals. She loved growing flowers and was always willing to take a stray animal. Her greatest love was her church; she enjoyed attending every service. She was a member of the Interstate Baptist Church. She was a loving wife, mother, and grandmother who will be missed greatly by all who knew her. She was preceded in death by her parents, husband; Guy Corley, daughter; Shirley Corley Gill, two brothers; Howard and J. C. Cone and a sister; Vera Franks.  She is survived by Son, Aubrey and wife Violet Corley of Shaw, MS.  Brother, Grover Cone of Biloxi, MS.  Son-in-law; James Buddy Gill of Cleveland, Six grandchildren, thirteen great grandchildren, three great-great grandchildren and a host of nieces and nephews. Cleveland Funeral Home is in charge of arrangements.

To order memorial trees or send flowers to the family in memory of Norma Corley, please visit our flower store.