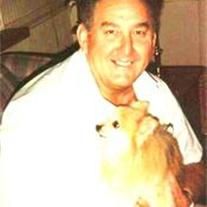 Paul Joseph Potter, 73, of Cleveland, MS passed away at his home on Sunday August 12, 2012 with his loving wife by his side. Visitation will be held from 6-8PM Tuesday August 14, 2012 at Cleveland Funeral Home. Graveside service will be held Wednesday August 15, 2012 at 10:00AM in the Delta Heights Memorial Gardens Cemetery. Reverend Jimmy Breland will officiate the service.  Born on July 9, 1939 in Chicago, IL, he spent most of his life in Michigan receiving his high school and college education. He spent 3 years in the U.S. Army, specializing in aviation mechanics and maintenance, becoming an excellent marksman, earning trophies and awards. Target shooting became his sport of choice. With interest in guns, gun safety, and love of country, he became a benefactor member of the National Rifle Association. Paul's career as an industrial maintenance manager led him to Color Tile and Duo-Fast in Cleveland, where he met and later married Carolyn Robertson on June 24, 1995. Paul was preceded in death by his parents, Joseph Tomlin of Chicago, IL and Leona Horoszka Radik of Grand Haven, MI, and his in-laws, Houston and Anita Robertson of Cleveland, MS.   Survivors of his immediate family include a daughter, Paula P. Balzeski of Lowell, MI; a son Craig A. Potter and wife Rachel of Grant, MI; two grandsons, three granddaughters, one step-grandson, two step grand-daughters, and one great grand daughter; three sisters and three brothers. He is also survived by his wife of 17 years, Carolyn R Potter of Cleveland and his extended family, Sheri L. Jackson and husband Bob of Cleveland; David P Livingston and wife Cecilia of Grenada; One step-grandson and three step-granddaughters. In lieu of flowers memorials may be made to the National Rifle Association, 11250 Waples Mill Road, Fairfax, VA 22030; Grace Community Hospice, 316-C North Davis Ave, Cleveland, MS 38732 or a charity of choice. Cleveland Funeral Home is in charge of arrangements.

To order memorial trees or send flowers to the family in memory of Paul Potter, please visit our flower store.