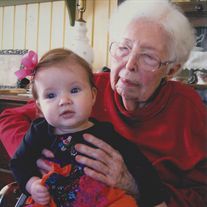 CLEVELAND - Pearl Ruth Martel, age 96, of Cleveland, passed away on Friday May 15, 2015 at the Indywood Estates Assisted Living in Cleveland.

Visitation will be held Sunday May 17, 2015 from 2:00 PM to 3:00 PM at the Cleveland Funeral Home in Cleveland. A private family graveside service will follow at Lambert Memorial Cemetery in Lambert, MS.

Pearl was born one of eleven children October 23, 1918 to Lother and Sarah Victoria (Bryant) Ruth in Lambert, MS. She graduated Lambert High School and was of the Baptist faith. She married Fredrick "Larry" Martel in 1949. Pearl worked most of her life as a clerk/typist for several entities including: the Quitman County Chancery Clerk's Office in Marks, MS, the Bureau of Navel Personnel in Arlington, VA, North West Nation Insurance Company in Washington, D.C., Army Surgeon General's Main Navy Building in Washington, D.C., U.S. Government Printing Office in Washington, D.C., Army Surgeon General's Physical Standards Division in Washington, D.C., and Prince George County Housing Division in Maryland. Pearl moved back to Mississippi in the 1970's to Lambert before moving to the Memphis, TN area. In her later years Pearl moved back to Mississippi to be near her family.

She was preceded in death by her parents, ten siblings and her husband Fredrick "Larry" Martel.

The family would like to express their sincere appreciation to Indywood Estates Assisted Living, Continue Care Home Health and Grace Hospice for their loving care given to their mother.

Pallbearers are Frankie Chandler, Jacopo Re, and Franklin Chandler.


In lieu of flowers, memorials may be made to First Baptist Church of Lambert, 816 6th Street Lambert, MS 38643 or to the charity of donor's choice


To order memorial trees or send flowers to the family in memory of Pearl Ruth Martel, please visit our flower store.