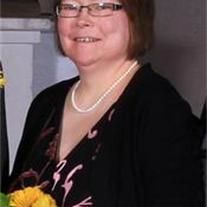 ROSEDALE - Roberta Jane Couch Moorhead, age 53, of Rosedale, went to be with her Lord  on Wednesday April 10, 2013 at the Baptist Memorial Hospital-East in Memphis, TN. Visitation will be held Friday, April 12, 2013, from 6:00 PM to 8:00 PM at the Cleveland Funeral Home in Cleveland and Saturday, April 13, 2013, from 1:00 PM till funeral services at 2:00 PM at Immanuel Baptist Church, 1300 Lamar Street, Cleveland, MS. Burial will follow in the Beulah Cemetery in Beulah, MS. Dr. Steve Huber and her son Jason Moorhead will officiate the service.   Roberta was born on August 25, 1959, to John and Joan (Brooks) Couch in Beirut, Lebanon, where they lived till she was the age of 2. She was a Rosedale High School graduate and she received a BA degree from Delta State University in English. Her father was a Baptist minister and they lived in many communities before arriving in Rosedale, where she met and married James Dasel Moorhead. They married on March 10, 1984, in First Baptist Church Rosedale. She was an Army wife for some ten years before moving back to Rosedale. In 1992, she began working for Meador & Crump Attorneys where she remained until her retirement in June 2012. While at For Sill, Oklahoma, she was awarded the Outstanding Civilian Service Award. Immanuel Baptist Church was a big part of her life, serving the Lord by serving the children of the church through Operation Christmas Child, former Commander of AWANNA, and Sunday school teacher. She also served on the youth committee and various other committees of the church. Roberta was a loving wife and dedicated mother who will be miss by all who knew her. She was preceded in death by her father, Rev. John Richard Couch. She is survived by her husband of 29 years, James Dasel Moorhead, of Rosedale, MS.  Mother, Joan Brooks Couch of Tupelo, MS.  Two sons; Jason Robert (Julie) Moorhead of Kabul, Afghanistan, and Jonathan Smith Moorhead of Rosedale, MS.  Two sisters; Ruth C. Brunner of Tupelo, MS and Regina Yeager of Spring Hill, TN. Brother, Richard Couch of Pollock, LA. and a host of nieces and nephews. Pallbearers are Clay McKee, David Gladden, Robert Crump, Dylan Yeager, Jeremy Teer and Jonathan Szot. Honorary pallbearers are the men's Scrap Iron Sunday School Class from Immanuel Baptist Curch. Memorials may be made to Immanuel Baptist Church Operation Christmas Child Fund, 1300 Lamar Street Cleveland, MS 38732 Cleveland Funeral Home is in charge of arrangements.

To order memorial trees or send flowers to the family in memory of Roberta Moorhead, please visit our flower store.