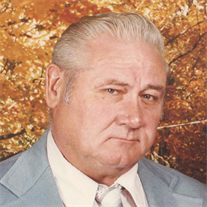 CLEVELAND - Roy Lee Bruce, age 82, of Cleveland, MS, passed away on Wednesday, May 04, 2016 at the Cleveland Heath & Rehabilitation Center.
Visitation will be held Friday May 6, 2016 from 5:00 PM to 7:00 PM at the Cleveland Funeral Home in Cleveland. Funeral Services will be held 2:00 PM Saturday, May 7, 2016 in the Cleveland Funeral Home Chapel. Burial will be at the North Cleveland Cemetery. Reverend Robert Haney will officiate the service.
Roy was born on January 09, 1934 to Melvin Charles and Ida Lee (Thompson) Bruce in Merigold, MS. He grew up in Pace, MS and Married Maurine Fletcher April 18, 1953 in Cleveland. Roy worked for Baxter Laboratories for 40 years as a fork lift driver. He loved to fish on the Mississippi River, tell stories, keeping up to date on politics, reading, watching television, working number puzzles and most importantly, spending time and playing with his grandchildren. He had attended Yale Street Baptist Church.
He was preceded in death by his parents Melvin and Ida Bruce, his 8 siblings, his wife Maurine F. Bruce and a special nephew who was like a son, Terry Purvis.
Roy is survived by Daughter, Judy Ledford of Cleveland, MS. Daughter, Cathy B. (Jim) Nelson of Cleveland, MS. Five grandchildren, Seven great grandchildren and a host of nieces and nephews.
Pallbearers are grandsons; Jim Nelson, Jr., Jason Nelson, Michael Nelson, Bobby Ledford, Chase McCool and Jim Nelson, III, Honorary pallbearers are Jim Nelson, Sr., Melvin Purvis, John Richardson and Danny Bruce.
Memorials may be made to St Jude Children's Research Hospital 501 St. Jude Place Memphis, TN 38105.
Cleveland Funeral Home is in charge of arrangements. The on-line guest register may be viewed and signed at www.clevelandfuneralhome.net.


To order memorial trees or send flowers to the family in memory of Roy Lee Bruce, please visit our flower store.