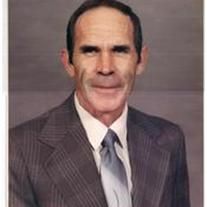 Ruben Eugene Waren, age 79, of Cleveland, passed away on Sunday February 17, 2013 at his home. He was born on August 01, 1933 to Claude and Mabell (Meirs) Waren in Rosedale. He married to the late Gladys Darlene Register Waren. He was a Rosedale High School graduate and had lived in Rosedale most of his life until moving to Louisiana. He later moved back to Cleveland to retire. He was a US Army Veteran where he obtained the rank of Sergeant. Ruben was a self employed operator of a construction site installation business for many years. He will be greatly missed by his family and friends. He was preceded in death by his parents, wife Gladys Darlene Register Waren, Two sisters Geneva Waren and Claudia Hollingsworth, brother Thomas Waren and a daughter Debbie McMurry.  The family will receive friends 2:00PM Tuesday February 19, 2013 at the family home 1304 Memorial Dr. for a Celebration of life remembrance. Ruben was buried next to his wife Gladys in Beulah Cemetery. He is survived by Daughter, Connie Waren Rizzo of Cleveland, MS. Son, Ronnie Waren of New Iberia, LA. Son, James Waren of Ringgold, GA. Brother, James Hoyt Waren of Memphis, TN. Sister, Hazel Gilmer of Augusta, GA. Daughter/niece, Wendy Waren of New Orleans, LA. and a host of grandchildren and great grandchildren. In lieu of flowers memorials may be made to St. Jude's Hospital 501 St Jude Place Memphis, TN 38105.

To order memorial trees or send flowers to the family in memory of Ruben Waren, please visit our flower store.