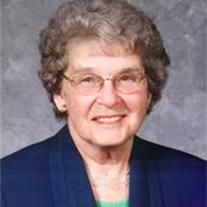 CLEVELAND - Ruby Cobb Freeman, age 95, of Cleveland, went to be with her Lord on Saturday April 20, 2013 at the Cleveland Personal Care Community. Visitation will be held Tuesday April 23, 2013 from 2:00 PM to 3:00 PM at Cleveland Funeral Home, with funeral services following at 3:00 PM in the Cleveland Funeral Home Chapel.  Burial will be at the Hickory Grove Cemetery in Inverness, MS. The Reverends Bob Hill and Clarence Edwards will officiate the services.  Ruby was born on December 02, 1917 to Roy and Lillie (Turner) McWhite inPickens County, South Carolina.  She attended Greenville SC Schools.  In 1938 she married John Ross Cobb. She and John lived in New Orleans on a couple of occasion due to John attending seminary. She was a true pastor's wife; their first church was in Bayou Labatre, AL. They also had ministries at First Baptist Church in Raymond and First Baptist Church Inverness before moving to Indianola in 1973. She was a former Bookkeeper for Witty Wall Accounting Firm and secretary for First Baptist Church of Indianola. In 1979 she married her high school sweetheart Val Freeman, they moved back to Easley South Carolina. Ruby was a Deacon at the FirstBaptist Church in Easley, SC. She was very active in her church and community. She was a mentor at the Adult Education Center and a volunteer at hospitals. Ruby loved to garden, paint, draw and write poetry, she was a great cook, who will be remembered for her coconut cake. Ruby was a loving, wife, sister, mother and grandmother who's strong mind, spirit and faith in God will be missed by all her friends and family. She was preceded in death by her parents; Roy and Lillie Turner, husbands; John Ross Cobb and Val Freeman, Sons; John Cobb and Fred Cobb.    She is survived by Son; Jimmy (Pam) Cobb of Greenwood, MS.  Daughter; Melinda Cobb Hill of Cleveland, MS.  Sister; Louise Hudson of Easley, SC.  Daughter-in-Law, Nancye Cobb of Durham, NC.  Daughter-in-law, Sharon Cobb of Greenwood, MS.  11 Grandchildren, Thomas Cobb , Sylvia Cobb, Andrea Cobb, Amanda Skelton, Amy Slater, Ann Howard Cobb, Michael Cobb, Lukas Cobb, Kristin Fermo, Chase Cobb and Josh Hill.  13 Great grandchildren and a several nieces and nephews.   Pallbearers will be her grandsons; Michael Cobb, Lukas Cobb, Chase Cobb, Josh Hill, Drew Slater and Christopher Collins.   Memorials may be made to St Jude's Hospital 501 St Jude Place Memphis, TN 38105or The American Heart Association 1101 North Chase Parkway Marietta, GA 30067

To order memorial trees or send flowers to the family in memory of Ruby Freeman, please visit our flower store.