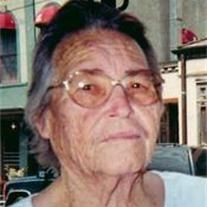 Ruby Lee Alexander Wooley, age 83, of Shelby passed away on Sunday August 21, 2011 at the Bolivar Medical Center . She was born on August 31, 1927 to Lester and Glennie (Gordan) Alexander.  Mrs. Wooley grew up in Quitman County . She was married to the late Garner Judson Wooley. Mrs. Wooley worked for Fred's Dollar Stores for 15 years as a clerk.  She was a member of Calvary Baptist Church . Her passion was quilting, having made quilts for many of her family members. She was a loving mother and grandmother who always paid special attention to her grandchildren. Visitation will be held Tuesday 08/23/2011 from 5:00 PM to 8:00 PM at the Cleveland Funeral Home in Cleveland . Funeral Services will be held 2:00PM Wednesday 08/24/2011 at Cleveland Funeral Home Chapel.  Burial will follow at the Coahoma Memorial Gardens in Clarksdale , MS . She is survived by four daughters, Betty Russell of Lambert, MS, Ruby Bustin of Ashdown, AR, Catherine Cooper of Cleveland, MS and Shirley Knight of Drew, MS.  Two sons Edward and John Wooley of Idaho , W. VA.

To order memorial trees or send flowers to the family in memory of Ruby Wooley, please visit our flower store.