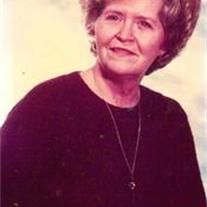 CLEVELAND - Sarah Dean Cummins, age 84 of Cleveland, passed away on Friday September 28, 2012 at the Joy Health and Rehabilitation Center in Cleveland.  She was born on March 14, 1928 to Stan Lee and Cleva Brown Long in McComb, MS.   Sarah attended French Camp Academy and the Presbyterian Children School. She was a former assistant manager at the Delta State University Book Store and for some 20 plus years she had been the assistant manager for the Crystal Club in Greenwood. Sarah was a member and former State President of the VFW Auxiliary. She enjoyed reading and working crossword puzzles. She was a loving mother, grandmother and great grandmother.  She was preceded in death by her parents, Husband Audrey E. Cummins,Son Jimmy Cummins, Brother Leon Long and a sister Iris Long Adams. Visitation will be held Monday October 1, 2012 from  9:00 AM to 11:00 AM at the Cleveland Funeral Home in Cleveland, with funeral service following in the Cleveland Funeral Home Chapel at 11:00AM   Burial will be in the Drew Cemetery. Rev. John Thomas will officiate the service.  She is survived by Son, William "Bill"(Darlene) Cummins of Boyle, MS, Son, Larry (Dianne) Cummins of Batesville, MS.  Six grandchildren Christopher Cummins of Batesville, MS, Adam Cummins of Batesville, MS, Wilson Cummins of Boyle, MS, Joshua Prestage of Cleveland, MS, Dawn Ellis of Memphis, TN, and Brandi Cummins of Bartlett, TN and four great great grandchildren. Pallbearers will be Christopher Cummins, Adam Cummins, Joshua Prestage, Mike Ellis, Gilbert Lopez, Bill Parks and Curtis Thompson. Honorary pallbearers are Charles Gay and Hugh Krutz. Cleveland Funeral Home is in charge of arrangements.

To order memorial trees or send flowers to the family in memory of Sarah Cummins, please visit our flower store.