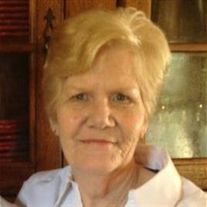 CLEVELAND - Sarah Boswell Hurst, age 71, of Cleveland, MS, died on Friday November 28, 2014 at her home.
Visitation will be held Monday 12/01/2014 from 5:00 PM to 7:00 PM at Cleveland Funeral Home. Funeral Services will be held Tuesday 12/02/2014 at 2:00 PM in the Cleveland Funeral Home Chapel. Burial will follow at the Delta Heights Memorial Gardens in Cleveland. Reverend Larry Braswell will officiate the service.

Sarah was born on July 05, 1943 to Prentiss "Dick" and Billie Irene (Chipman) Boswell in Sunflower County, MS. Sarah attended grammar school in Boyle. She married Millard Hurst on January 7, 1981. She worked at Baxter Laboratories for a number of years as well as Gaines Oil as a cashier. She also worked at Lawson and Lawson Towing before retiring and becoming a homemaker. She was a former Providence Baptist Church member and attended the Nazarene Church. Sarah loved to play games on the computer and cook for her family. She was a loving wife, mother, grandmother, great-grandmother and sister. She was preceded in death by her parents, and three brothers Malcolm Boswell, Ralph Boswell and George Boswell.

Cleveland Funeral Home is in charge of arrangements. On-line guest register may be viewed and signed at www.clevelandfuneralhome.net.


To order memorial trees or send flowers to the family in memory of Sarah Boswell Hurst, please visit our flower store.