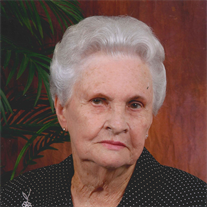 DREW - Theda Mae Helms Fleming, age 92, of Drew, MS, passed away on Monday June 27, 2016 at her home. She was born on January 20, 1924 to Jessie and Queenie (Bush) Helms in Drew, MS. Ms. Fleming was a lifelong resident of Drew, MS. She married J. F. "Jeff" Fleming. She was the owner of Fleming Drive Inn for several years. Ms. Fleming also assisted her husband with several service stations they ran. They also owned the Ruleville Feed and Seed for several years. Ms. Fleming was a founding charter member of 1st Baptist Bible Church in Drew. She was a Proverbs 31 woman, always taking care of her family doing everything she could to support them in all their endeavors. Ms. Fleming took great pride in being called "Granny Fleming" to all. Her passion was taking care of others before herself.

Memorials may be made to the Lighthouse Children's Home MS-440, Kosciusko, MS 39090.
Cleveland Funeral Home is in charge of arrangements. The on-line guest register may be signed at www.clevelandfuneralhome.net.


To order memorial trees or send flowers to the family in memory of Theda Mae Fleming, please visit our flower store.