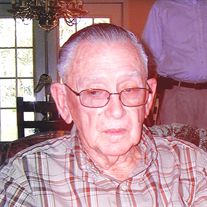 
He was born on July 27, 1927 to Vence C. and Bertha (Stanford) Washington, Sr. in Skene. He graduated Shaw High School and joined the United States Navy and served on the Island of Guam. He married Pallie Jean Lewellen on July 6, 1957 in Bolivar County. Mr. Washington was a former parts salesman for Wade Incorporated and West Implement for many years until his retirement. He was a member of Yale Street Baptist Church.
He was preceded in death by his parents, Vence and Bertha Washington, wife, Pallie Washington, 3 brothers; Earl, Alton and Stanley Washington. 4 Sisters; Earline Dempsey, Hazel Clay, Ruth Sparkman and Eva Mae Williams.

He is survived by a host of nieces and nephews.

Memorials may be made to Yale Street Baptist Church.
Cleveland Funeral Home is in charge of arrangements.

To order memorial trees or send flowers to the family in memory of Vence C. Washington Jr, please visit our flower store.