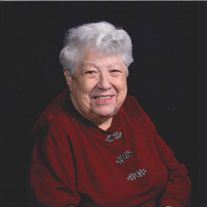 Virginia was born on July 12, 1931 to James Patrick "J P" and Mary Lou (Duke) Minyard, Sr. in Louisville, Kentucky. She moved to Mississippi at an early age. She graduated from Belzoni High School in 1950. After graduation she married Joe Asa Robertson on June 17, 1951 in Belzoni. Virginia worked as a secretary for various employers and retired at age 56. She was a member of First Cumberland Presbyterian Church. Virginia had several hobbies that she was very proficient in; painting, ceramics and sewing. She also was a rock collector, having traveled 49 of the 50 States collecting a rock from each one for her garden. Virginia was a very social person and generous to all. Her family says she was a loving wife, mother and grandmother and will be missed by all her friends and relatives.
She was preceded in death by her parents James and Mary Minyard, Sr., three brothers; James P. Minyard, Jr., Robert Minyard, and Jerry Minyard.

Virginia is survived by her husband of 64 years Joe A. Robertson of Columbus, MS. Daughter, Donna and husband Jeff Wilber of Sonoma, CA. Two grandchildren, Barret and Emily Wilber both of Sonoma, CA. She also leaves a host of nieces and nephews.
The Wilber family would like express gratitude to Becky Cochran, Joseph, James, Cliff and Mike Jenkins for their love and devotion toward their Aunt Ginny.

Memorials may be made to the First Cumberland Presbyterian Church 2698 Ridge Rd Columbus, MS 39705.


To order memorial trees or send flowers to the family in memory of Virginia Lee Robertson, please visit our flower store.