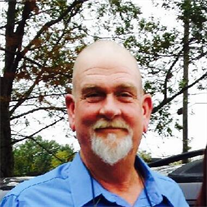 RULEVILLE - Walter "Peck" S. Warfield, age 54, of Ruleville, MS passed away on Friday February 05, 2016 at the North Sunflower Hospital in Ruleville.
Visitation will be held Sunday February 7, 2016 from 1:00 PM to 3:00 PM at the Cleveland Funeral Home in Cleveland. Funeral Services follow at 3:00 PM in the Cleveland Funeral Home Chapel. Burial will be at the Linn Methodist Church Cemetery. Reverend Robert Haney will officiate the service.

Walter was born on March 6, 1961 to Allen and Juanita (Martin) Warfield, Sr. in Bolivar County, MS. He graduated from Bayou Academy and attended the University of Mississippi and Arkansas State University. Walter had previously run the family quail farm in Gunnison and he had also been a farmer himself before becoming a truck driver for Cooper Freight for the past 14 years. He was married to Kathy Belk Warfield for 30 years. Walter enjoyed watching NASCAR racing, fishing, cooking on his grill and most of all being near his family. He was of the Baptist faith.
Walter was preceded in death by his parents Allen and Juanita Warfield, Sr.


To order memorial trees or send flowers to the family in memory of Walter Warfield, please visit our flower store.