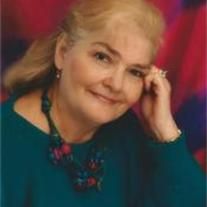 Seattle- Waudean Stanton Thomas age 77 of Seattle formerly a Cleveland native passed away at her home outside Seattle last week.
Visitation will be 10:00AM Monday January 14, 2013 at Morrison Chapel Baptist Church with funeral service to follow at 11:00AM. Burial will be at New Cleveland Cemetery . Rev. John Thomas will officiate the service.
Waudean was the daughter of life long Cleveland residents and Morrison Chapel members Ernest and Essie Stanton.  Waudean held numerous college degrees: a BA from Delta State, a MA from LSU and a BS from Seattle University .  In 1960 she married Air Force Lt. John Thomas at Morrison Chapel in Cleveland.  A long time Educator, Waudean taught High School Spanish and ESL until at 50 she made a career change and became a Computer Programmer and Technical Writer.  Throughout her life Waudean remained active in her church, and was volunteering at her church as an ESL teach at the time of her passing.  Waudean had a love of travel, visiting many places around the world including Egypt , China and Russia .  She remained actively working in the Computer Software field until 2009 because as she would say "I can't sit home and do nothing".
She is survived by daughter Tamara Williams, Bellevue, WA.   Brothers; Oris Stanton of Somerset, KY and James Stanton  ofLawton, OK.
Memorials may be made to the American Cancer Society P.O. Box 22718 Oklahoma City, OK 73123-1718
Cleveland Funeral Home is in charge of arrangements. On-line guest register may be viewed and signed atwww.clevelandfuneralhome.net

To order memorial trees or send flowers to the family in memory of Waudean Thomas, please visit our flower store.