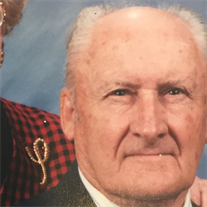 Mr. Willie P. "Bill" Cross died surrounded by his family and friends at Marshall Medical Center North in Arab, Alabama on February 5, 2016 at the age of 86.

Visitation will be held Monday February 8, 2016 at Cleveland Funeral Home from 5:00 PM till 7:00 PM. Funeral service will be 11:00 AM Tuesday February 9, 2016 at Morrison Chapel Baptist Church. Burial will follow in Beulah Cemetery.

Bill was born on January 27, 1930 to Thomas Watson Cross, Sr. and Emma Smith Cross in Sunflower County Mississippi. He moved to Cleveland, Mississippi where he met the love of his life, Idell Avritt. The two were married on December 29, 1952. The couple moved to Detroit, Michigan before returning to settle in Cleveland, Mississippi. Bill was a United States Army Veteran having served in the Korean War. Later the couple moved to Clarksdale, Mississippi where they lived until they and Mike moved to finish out their lives near their daughter and grandchildren in Arab, Alabama. Bill worked for Emhart Corporation until he retired. He was an avid hunter and fisherman who loved blue grass gospel music. He was a devoted family man who loved nothing more than spending time with his kids and grandkids.
Bill is survived by his son, Michael Cross of Arab, Alabama; his daughter and son-in-law Susan and Levone Sutton of Arab, Alabama; his granddaughter Jennifer Arrington of Arab, Alabama; his grandson and grandson's wife, Chris and Theresa Frazier of Metarie, Louisiana; and three great grandchildren: Michelle Frazier of Hampton, Virginia, Mary Elizabeth (MEA) Arrington and Dale Arrington of Arab, Alabama. He also had some grandchildren and great grandchildren he adopted when he moved to Arab, Alabama: Gayla Shedd, Tonya and Kenny Long, and Janice and Rodney Cox; Elizabeth Shedd, Will Head, Aaron Shedd, Brent Shedd, Callie Long, Dakoda Long, Austin Long, Caitlyn Cox, and Reagan Cox all of Arab, Alabama. He is also survived by two sisters: Ann Johnson of Greenville, Mississippi; and Eva Mae Munn of Greenwood, Mississippi. In his extended family he is survived by a host of nieces and nephews, as well as, a several great nieces and nephews.
Bill is preceded in death by his wife of 63 years, Idell Cross; his parents Thomas and Emma Cross; his brothers: T.W. Cross, Clinton Cross, Linton Cross, Lee Cross; and his sister Emma Dell Birr.
Memorials may be made to the Arab First United Methodist Church Youth or Children's Department P O Box 470 Arab AL 35016 or to the church of the donor's choice.
Cleveland Funeral Home is in charge of arrangements. The on-line guest register may be viewed and signed at www.clevelandfuneralhome.net.

To order memorial trees or send flowers to the family in memory of Willie "Bill" Cross, please visit our flower store.